So we had our red sex link chicks in a brooder box, but all too quickly grew from chicks to pullets. They were outgrowing the brooder box, so it was time to make a decision on the coop. We looked for coops online, but we couldn’t find an affordable coop that looked like it could withstand Siberian-like winters.  As I mentioned in an earlier blog, everything I read leaned towards building your own, but I could tell the hubby wasn’t very excited about constructing a coop. So to make it a bit more enticing, I allowed him to pick out the plans. We searched endlessly but finally agreed on the “The Daisy.”  The plan originated from, Clean Coops and the cost was $35.00 to download.  It was $35.00 well spent since my hubby is not a woodworker or a tinkerer(and I’m more comfortable in the kitchen).  I printed out all 41 pages and handed the “stack” to him. Oh dear, what did I get him into?

We knew there was no time to waste; we had to get started on that coop in a hurry.  But the weather wasn’t cooperating–where’s spring?  It was a cold and rainy spring so hubby started the frame-work in the garage. 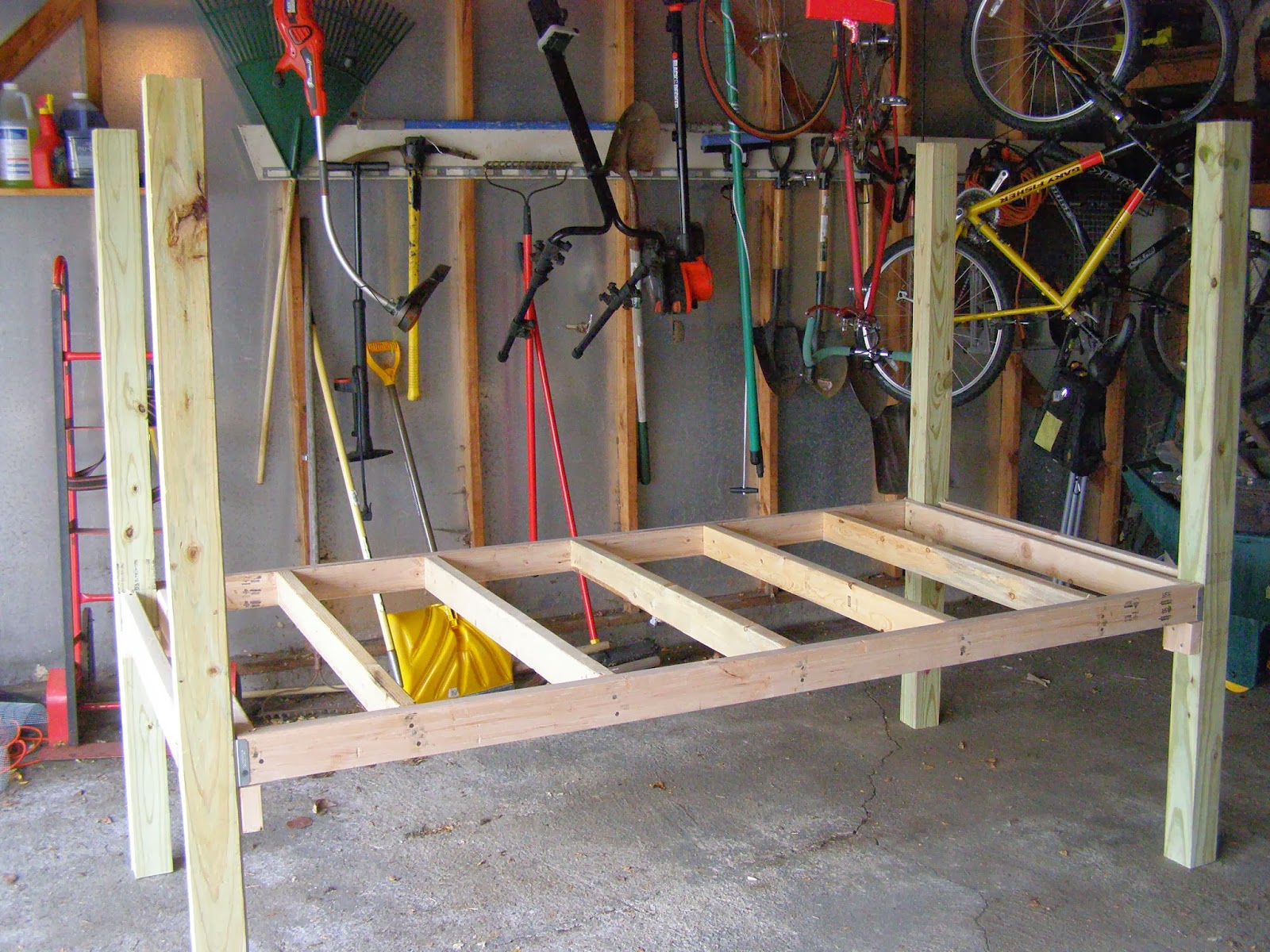 He was able to construct this in two hours. The equipment needed is minimal: power saw and drill, a level, tape measure, t-square, and hammer. 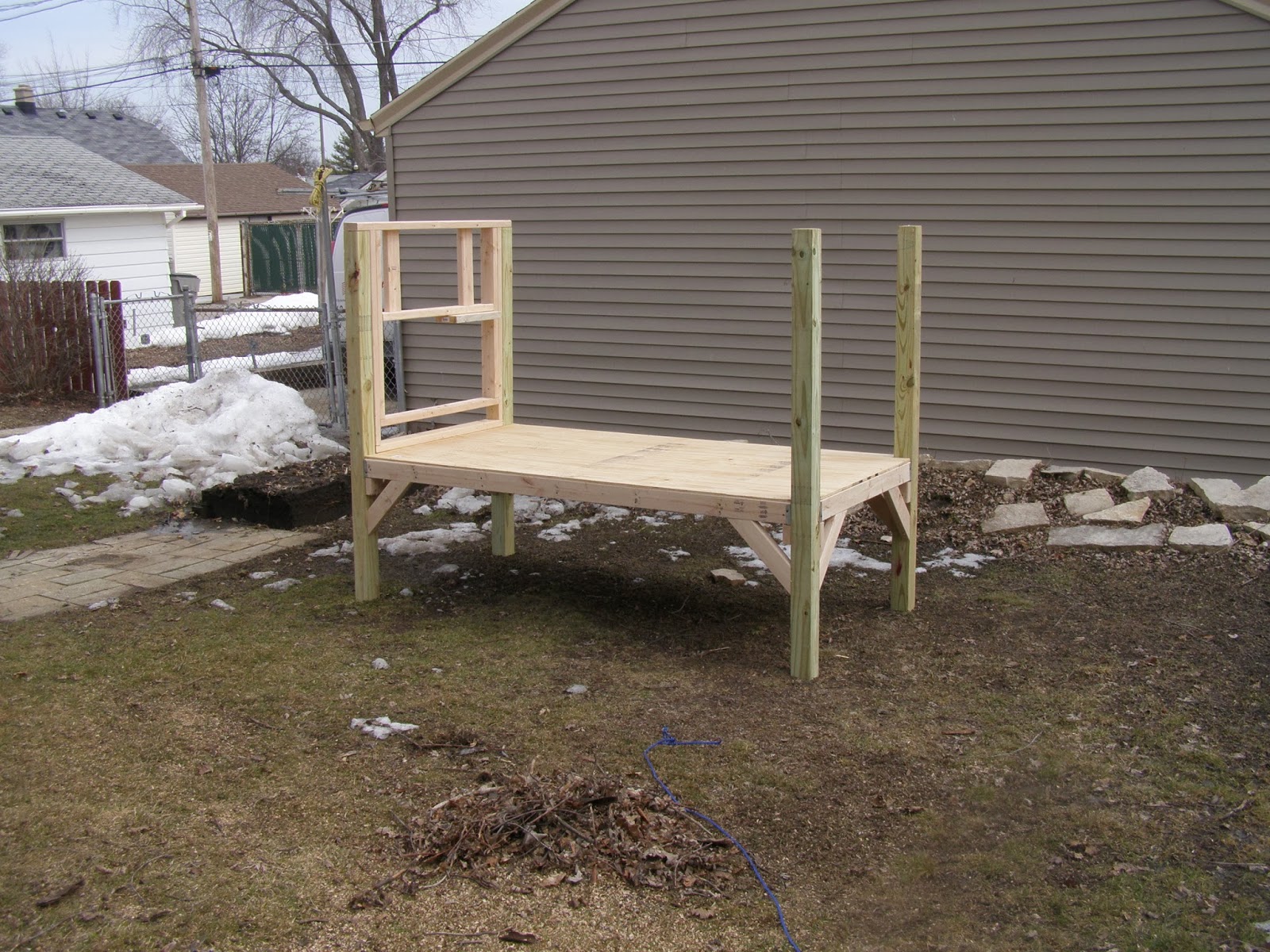 On the first decent spring day, we carried out the framing into the yard. Here he has added the plywood floor and the beginning of the first nesting box. 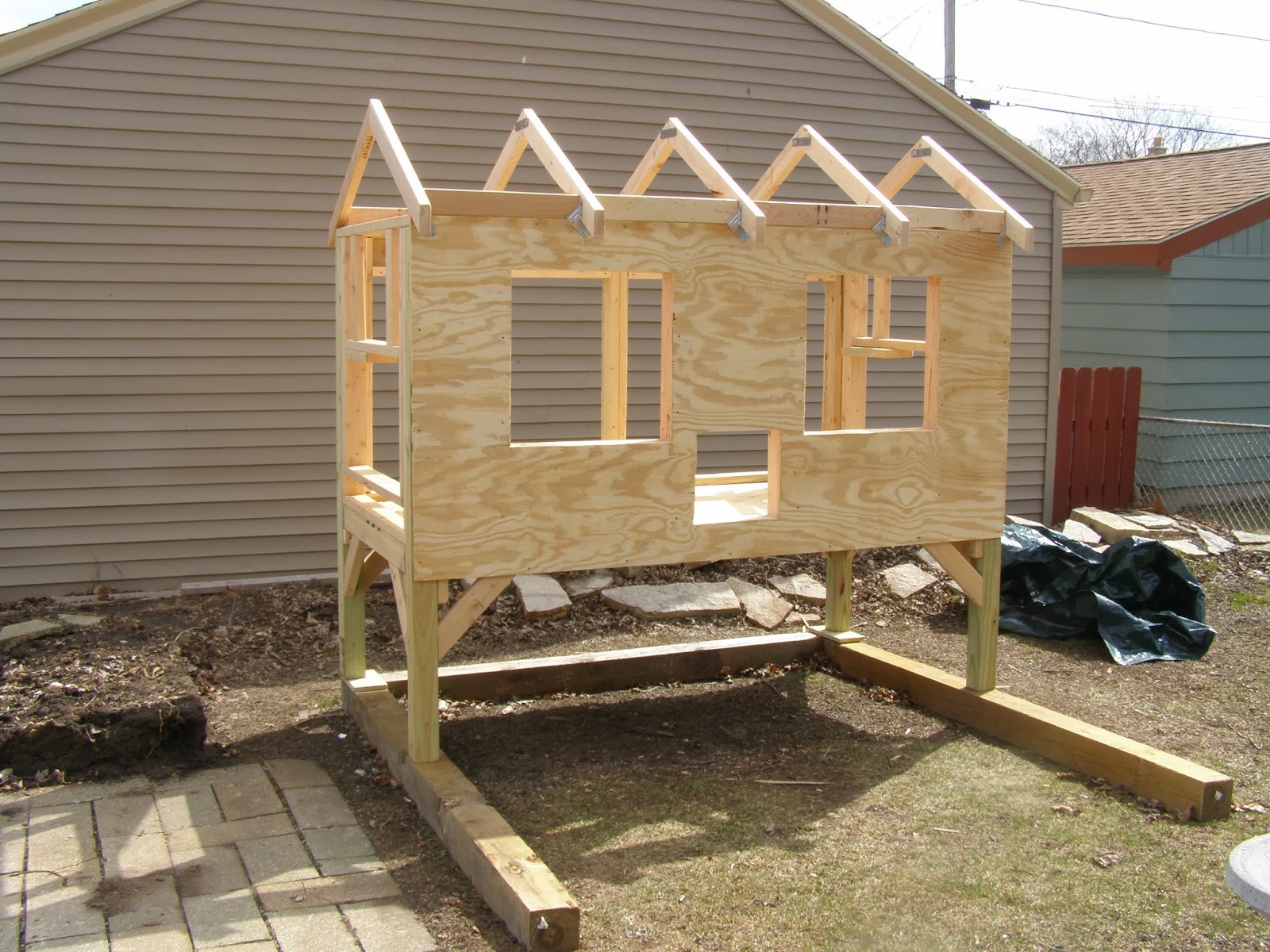 Looking more like a coop here. The other three walls were framed-in before placement of the front wall and the frame of the roof.  You can see the coop is elevated onto timbers, but we found out later, the height made for difficult egg collection. 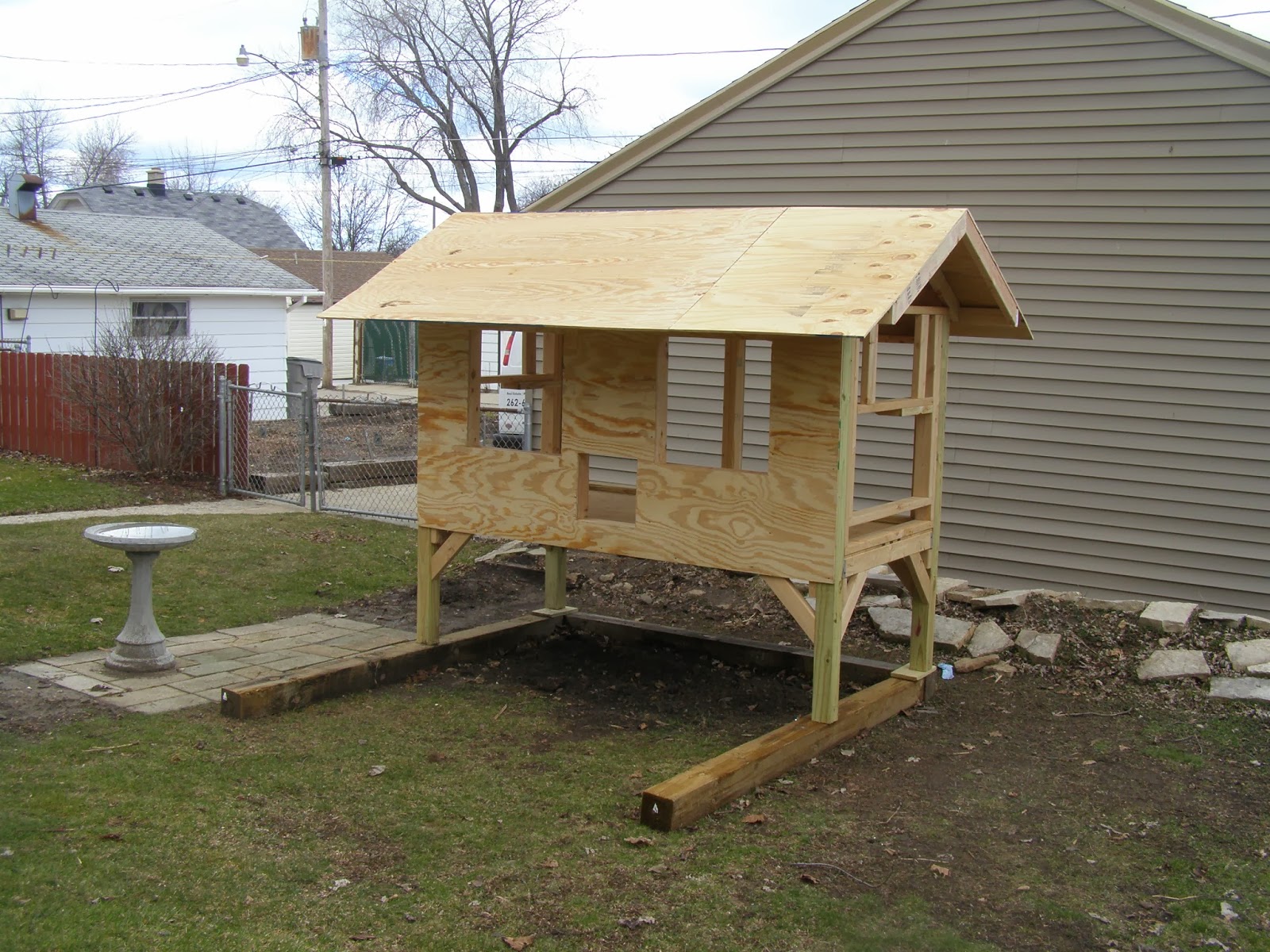 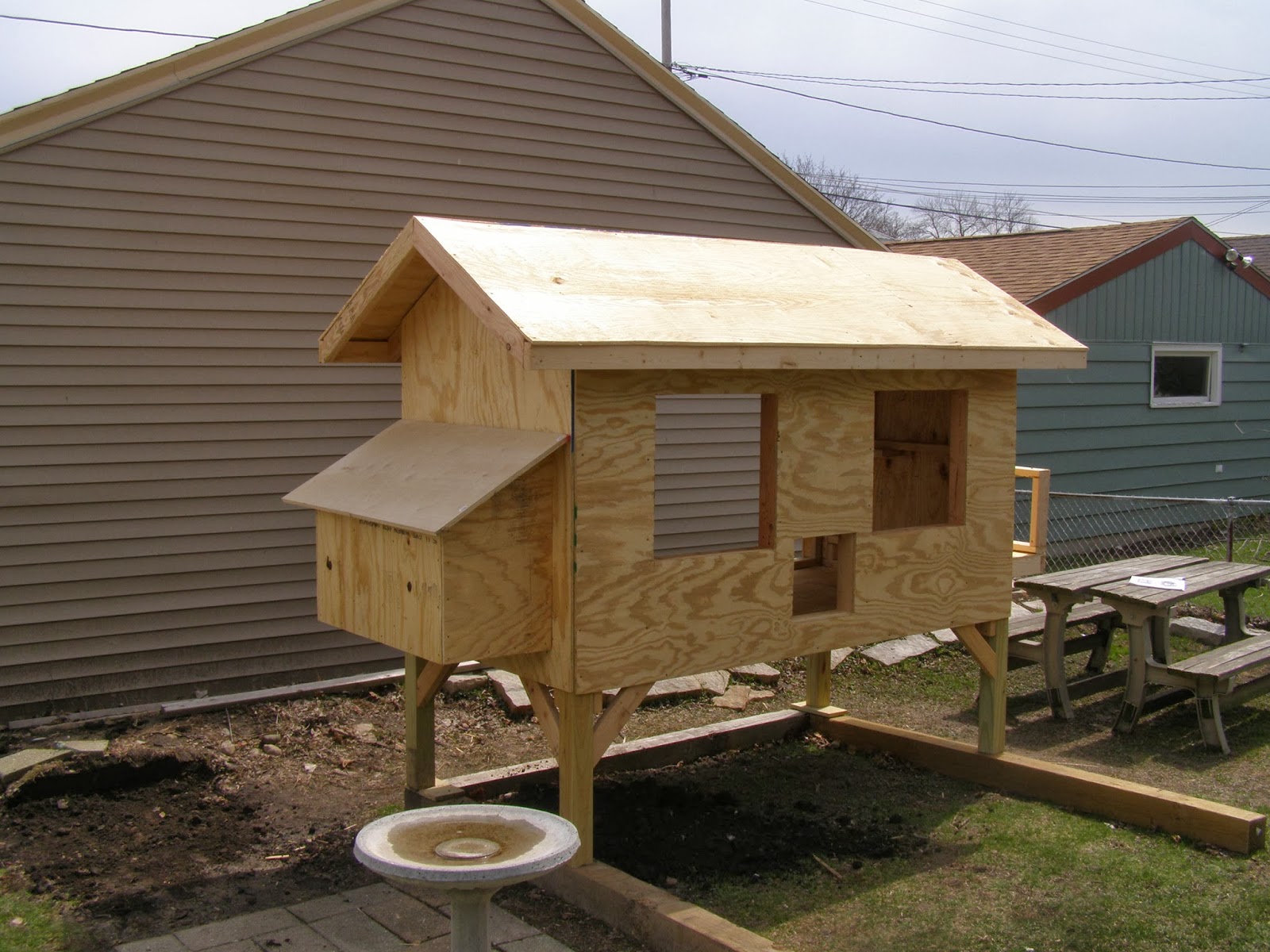 Rest of the walls go up and here is the finished nesting box. Inside the box there are dividers forming three equal nests with a hinged lid. We made sure we had quick and easy access to eggs in the am. Differing from the plans, we made only one active nesting box and made the other a storage area. Remember, this coop was designed for 8-12 hens; we are allowed four. 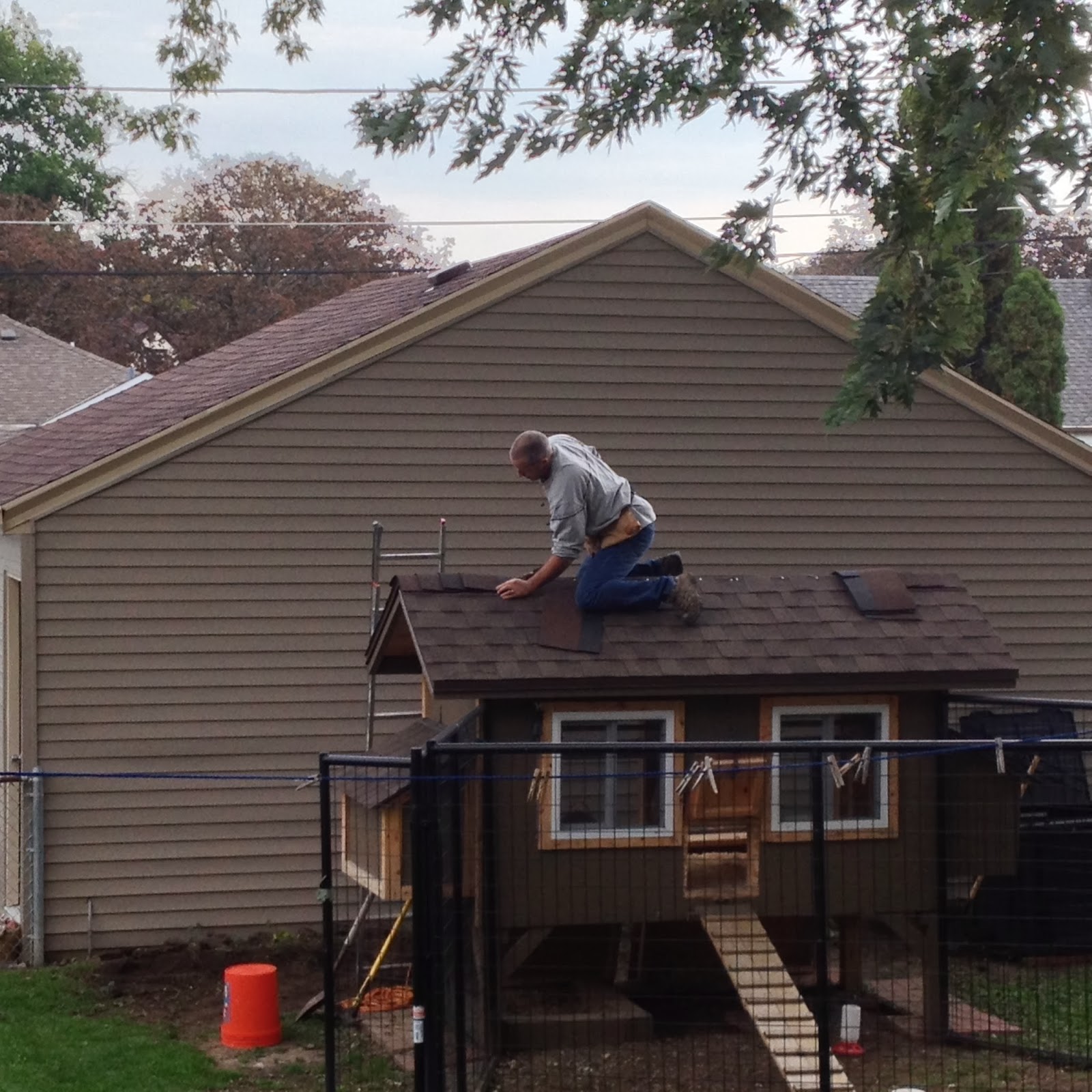 We kind of jump to the finished coop but here it is(it was a busy spring). . I refer to the coop as the Taj Mahal of coops! It’s equipped with two screened windows, two roosts, a heated water dish, a fan and a convective heater. Notice the sand box on the left; for the girls to take dust-baths.  We purchased an old dog kennel from Craigslist for $250.00 for the chicken run. Between the enclosed foundation of the coop and the run, the chickens have 100 square feet of their own. We keep them in the enclosure while we are gone, and then let them out to roam the fenced-in yard when we are home.  We’ve clipped their wings only once, and had to adjust the fence in certain spots to prevent them from flying over the fence and into the neighbor’s yard. 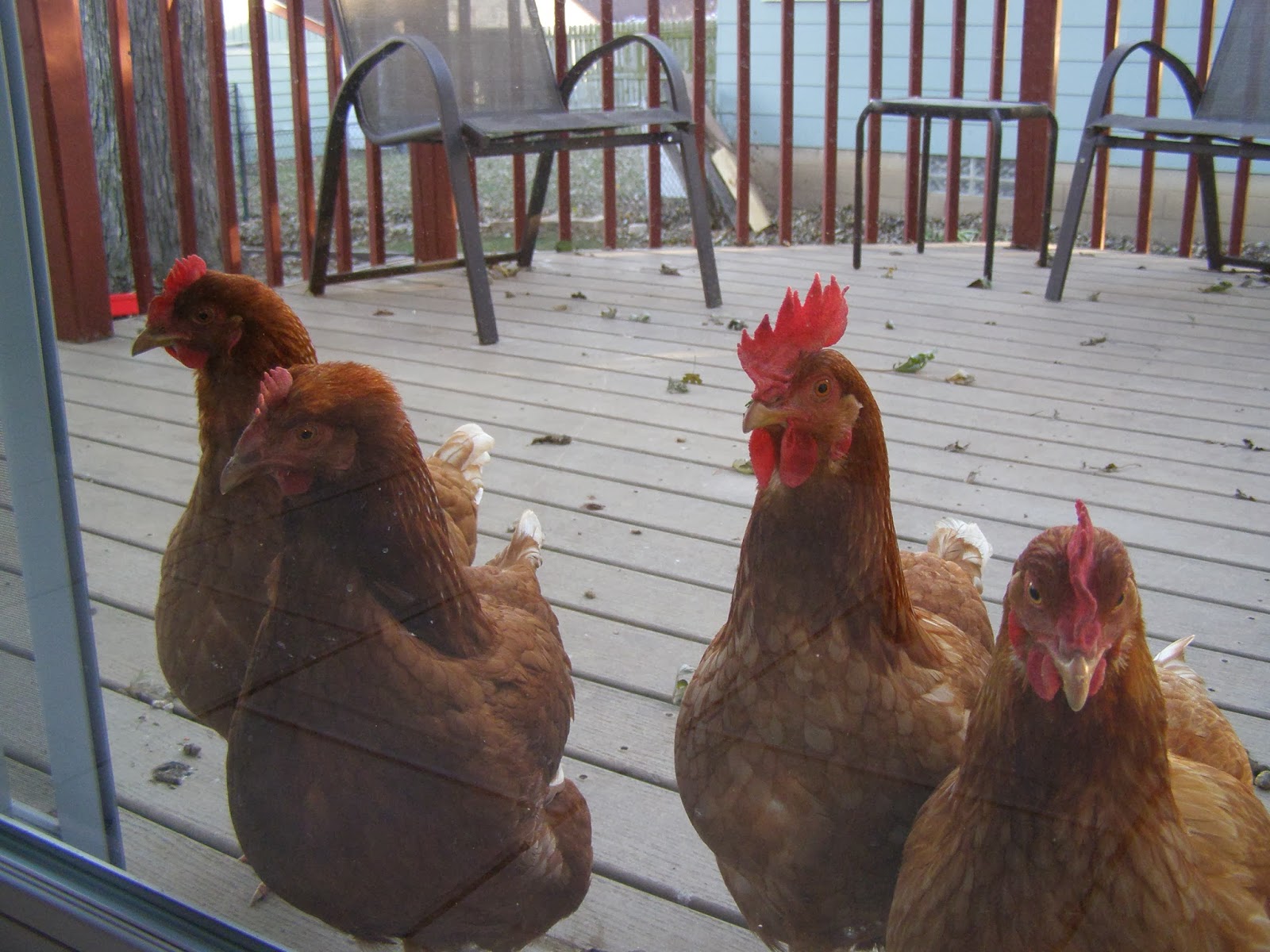 My adorable girls.
Like I said earlier, it was NOT a nice spring.  He was working on that coop in 38 degree weather, so it took longer than it should have; He started building the end of March and finished in early May.  He touched-up and made adjustments here and there until the winter.  I’m not sure I’d recommend doing it this way, but I have to be honest, the quick-growing hens were definitely great motivation.
The start-up costs for these gals is on the high-end, $650.00 for the coop and run and that doesn’t include extras like the heater, and the heated water bowls(two of them-one inside the coop and one for outside). My hubby used odds and ends from the garage like extra shingles and paint so that helped keep costs in check.  But to be honest, we don’t have these girls only for the eggs. I had read how delightful these girls can be for pets, and I was intrigued. We have had the girls for 10 months, and we have become big chicken enthusiasts.  They each have such a distinct personality, and whoever said chickens are dumb, didn’t know chickens very well.  They are smart and interesting birds with always a lot to say. There’s a youtube clip of a gal going on about how chickens are the gateway farm animal.  Oh, how ridiculous.
Next blog entry: Raising goats in the city. Not really.

It began around this time last year: the want of the sound of little feet scurrying around the house and the joyful sounds baby…chicks make.  I talked the toughest party into it(my hubby) now I have to talk my neighbors into it.  The backyard chicken law just went into effect on 07/28/2011, so this ordinance is relatively new. I read through all of the requirements necessary to obtain a permit for a mere four chickens, and I was discouraged. The list was long, and I wasn’t confident we could comply.  The space was the first concern: It had to be 25 feet from any habitable structure(eeked by-barely, and we have a double lot). And then there was approval from any neighbor who abuts our property.  I needed to contact and get the blessings from SIX of our neighbors. This was a huge challenge since it was January, and three out of the six I had waved to but never had spoken to. Oh, and did I mention, one of the neighbors was a renter?  I contacted all in person and delivered the form they needed to sign for the city, an informational pamphlet and a personal letter(below). 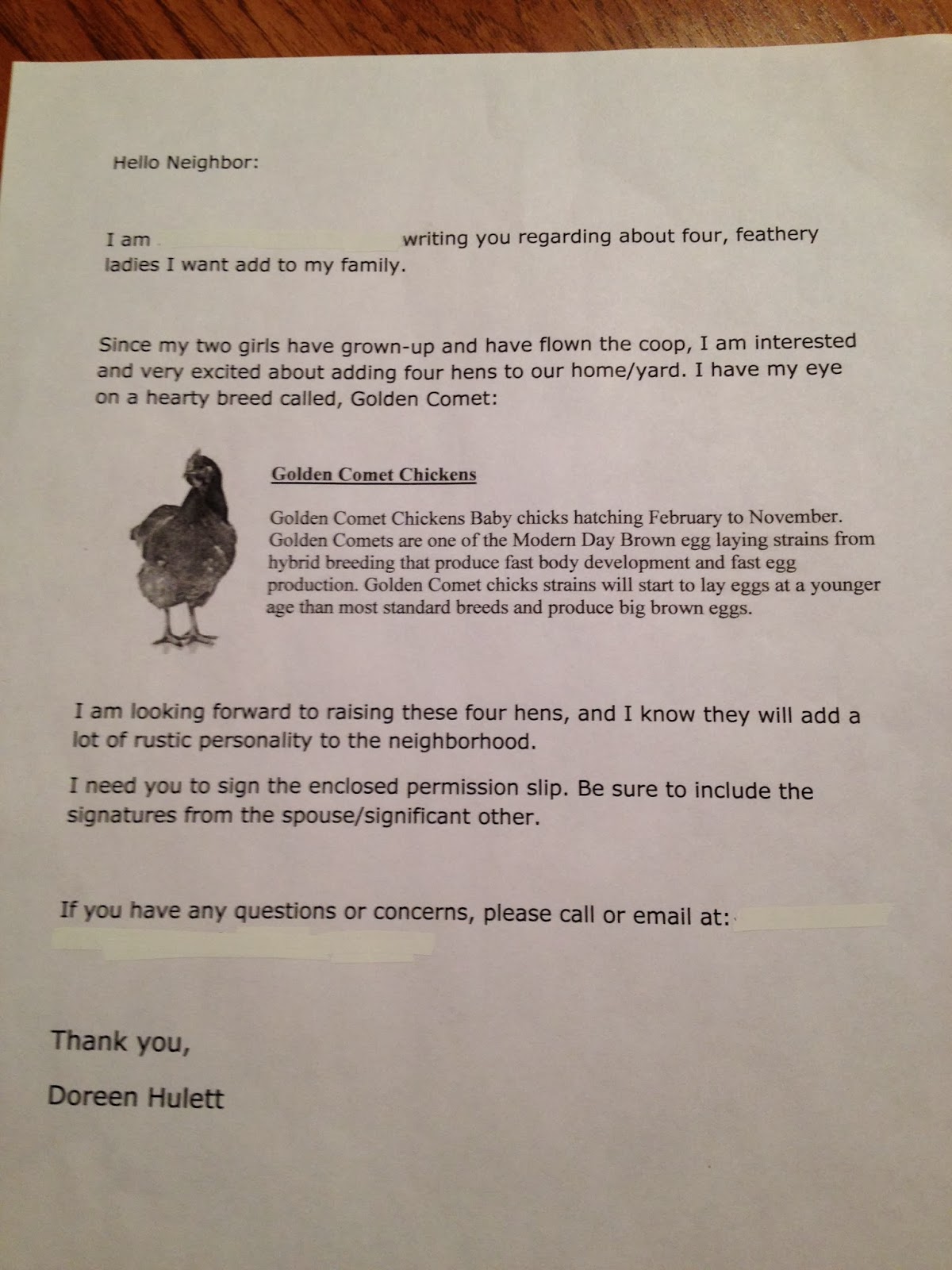 We received a lot of questions and a few of the neighbors were pretty excited. With the aid of my wonderful husband and a tenacity rarely seen in me, we finally collected all of the signatures by mid February.  My chicks were pre-ordered by February 13th and the permit issued March 1st. I may have put the chicken before the egg just a little bit. We picked up the girls March 15th! 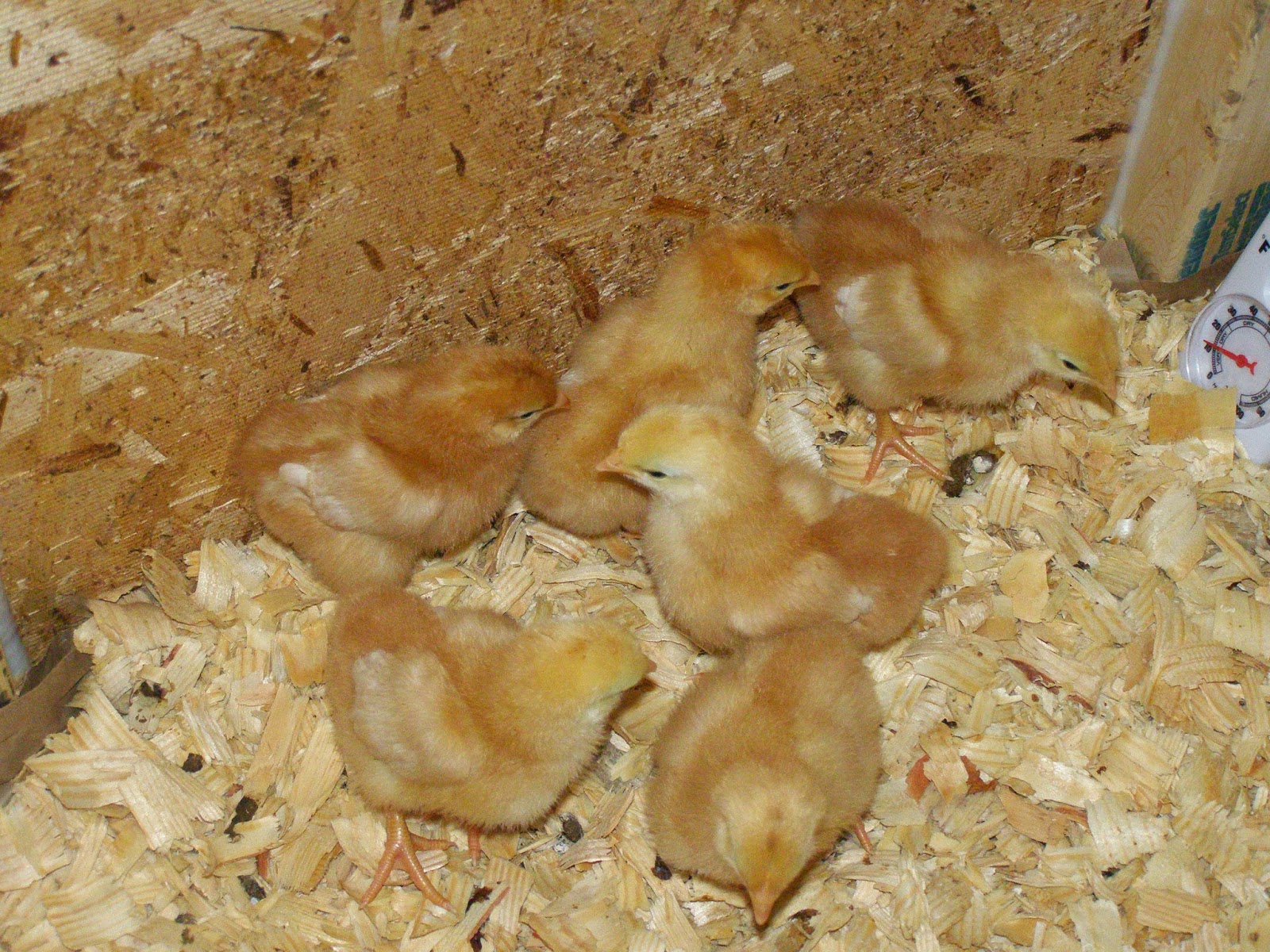 So darn cute at a few days old.

If you are thinking about adopting a few chickens, here are a few things to consider.

Decide whether to build a coop and a run or to buy a kit off of the internet. We looked at all the coops available, and we decided we needed to build ours. The coops we could buy looked unstable and not frozen tundra ready. And after reading several comments on the internet, by the time you put-together an expensive kit, you may as well have built your own.  Get plans!!!  Building a chicken coop is nothing like a dog house; chicken coops are “special.”  For example, the coop plans we purchased had a box underneath the roost to catch the droppings(and occasional eggs). It looks like a big tool box you just lift out and dump. Cool, little features like that can make chicken maintenance a breeze. We ordered our plans from: http://www.backyardchickens.com/

Do you have somewhere to keep the chicks warm and safe?  They need a brooder box with a light to keep them safe and warm until they are ready for the coop. We kept them upstairs and away from any inquisitive felines with a 16 cubic feet  brooder box made of plywood. It took a few hours to make and held the chicks for nearly eight weeks. Plan on securing the top of the box with rabbit fencing or something like it to keep the girls from flying up and out. They start testing their wings pretty quickly. Be prepared for dust from shavings(no cedar use pine) and an occasional accident from the girls. 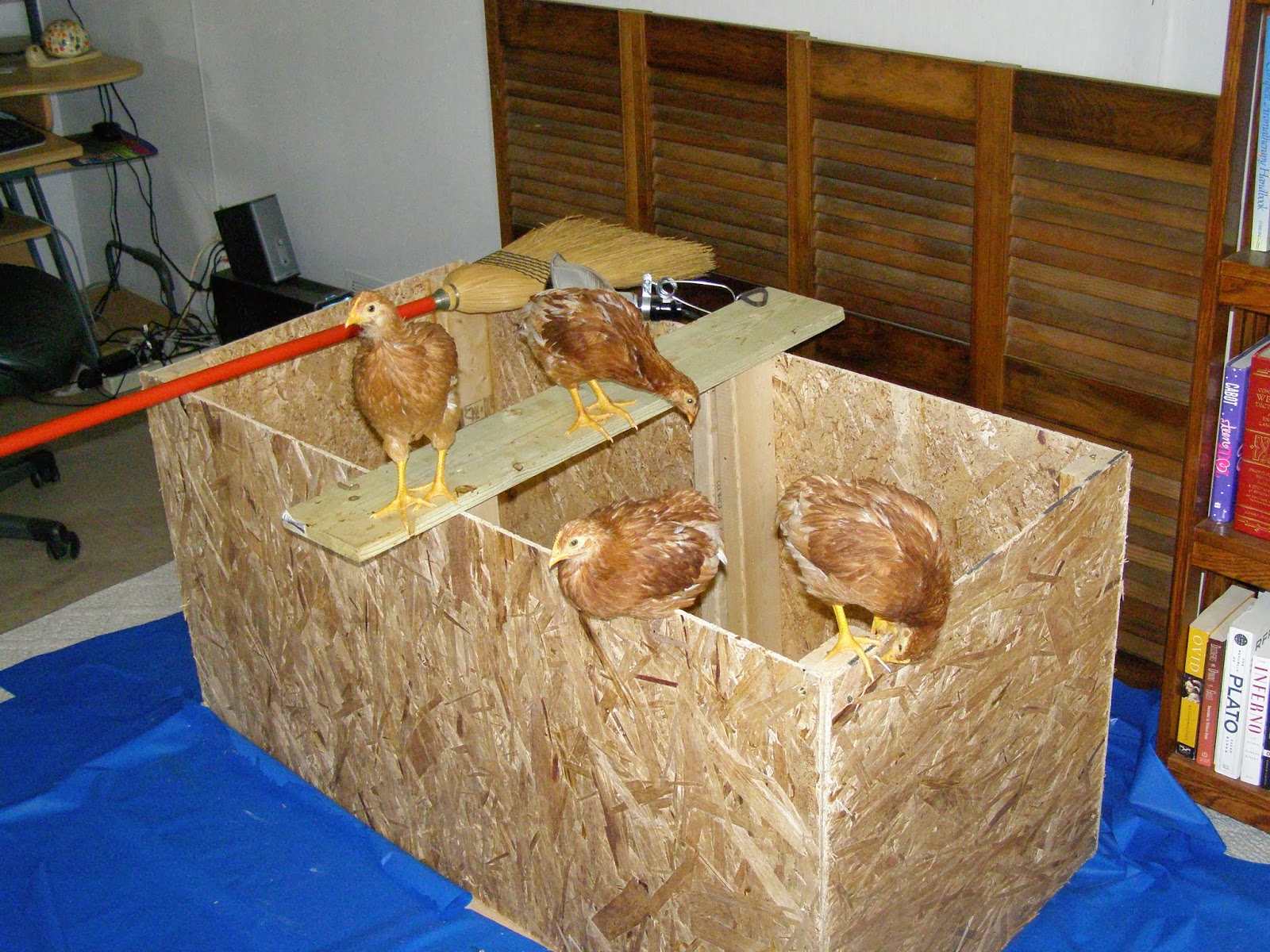 Here are the girls perched on the brooder box. They are about five weeks here.
Do your research on the breed.  Some are bred for quick maturity, high-production and others for their friendly dispositions.  We opted for the former with red sex-link(guaranteed to be all hens), and we are not disappointed.  The girls started laying in July and are still laying an egg each a day.  I haven’t bought eggs in six months.  You can order chicks from the internet but the minimum order is prohibitive.  Some require 15 or more. I could only have four, so we ended up purchasing our chicks from a feed and tractor store in an outlying area. They required we buy six, so I gave two of them away to a friend.
Remember what mature chickens do: In between laying eggs and looking adorable, they will hunt and peck and scratch your yard.  We like to let them out of their run when they can be supervised(we have a hawk who regularly visits the yard), and they tear-up a lot looking for bugs. On the other hand, our grass has never looked greener from all of their “deposits.”  We’ve been composting their poo all winter long and that’s going to be dumped into our vegetable garden come spring. You wouldn’t think four chickens would have a lot to give but they do.
We received some dubious reaction when we said we were getting chickens as pets, but they have turned out to have pecked their way into our hearts. Corny but true.
Next post will be about cost and the fun involved with building a coop in early spring.