I never knew how cherished Wisconsin tomatoes were until the family took a trip out West. We set up camp in a beautiful park called Rocky Mountain National Park. We set out to get fire wood the first night of camp and the woman manning the stand asked where we were from. When we told her Wisconsin, her eyes became big when she asked, “Did you bring any tomatoes with you?” Huh? Aren’t all home-grown tomatoes created equal; no matter where they are grown? Apparently not as we proceeded to give this woman the sad news of no tomatoes from home. I started to pay more attention to the food away compared to the food at home, and I began to notice something: We have really good food here. You’ll understand if you ever stop by one of our cheese castles situated conveniently near the interstate. I make the hubby stop every time, so I can try a new cheese or two. Or how about locally grown sweet corn brushed lightly with hand-rolled butter? Let’s not forget the Wisconsin State Fair iconic Cream Puff–evidenced below. 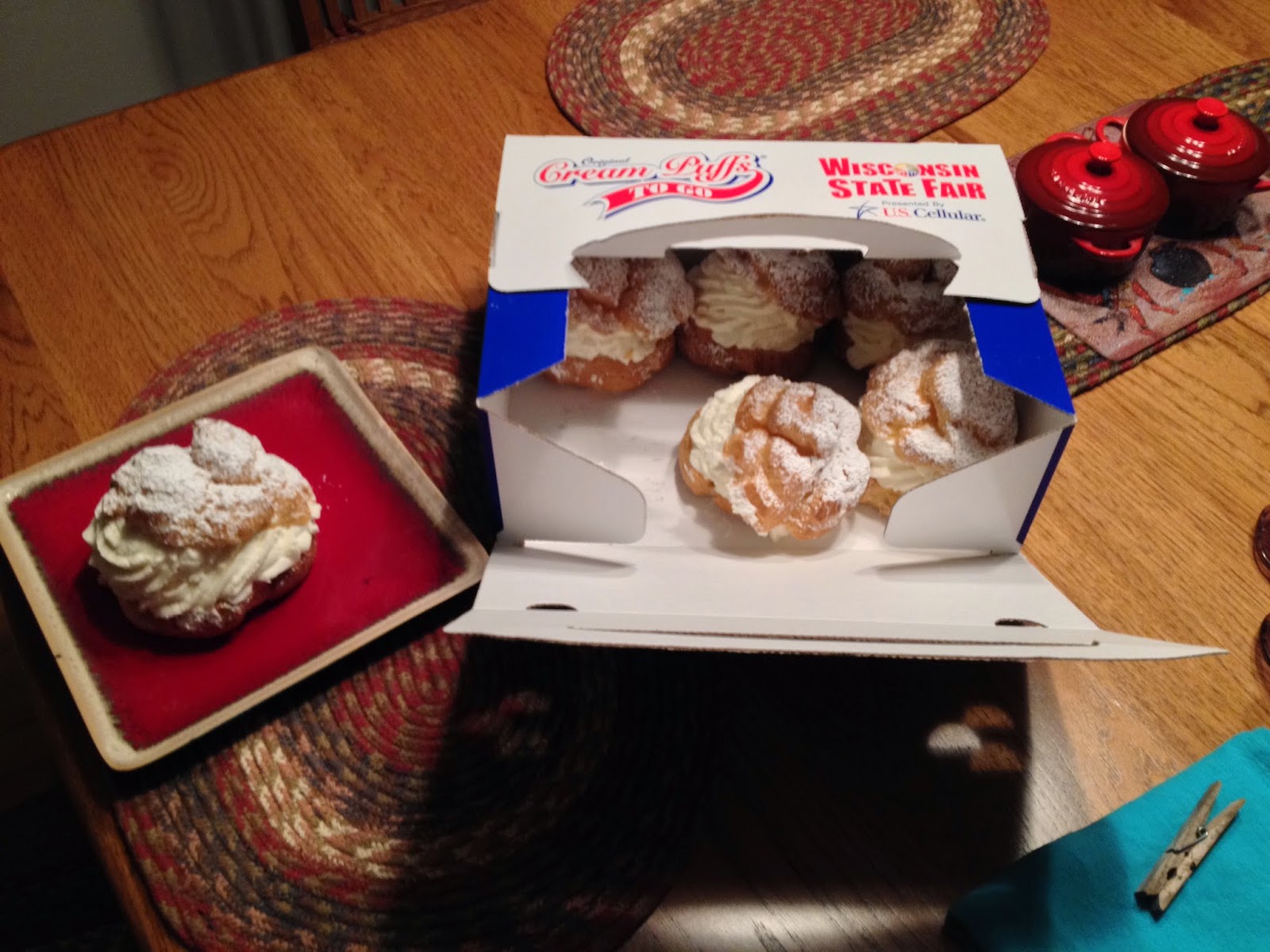 I think about the woman in Colorado as I’m prepping my sixteen pounds of tomatoes for salsa. The only thing I can think about is cooking up the tomatoes before I am over-run with fruit flies…again. I succeeded in using up a lot of tomatoes but there are more ripening on the vine even as I type. Below is one of my methods in using up tomatoes. I have more ideas planned for the tomatoes ripening on the vine, but for now, let’s focus on the most labor intensive: salsa. If you ask me for a jar of this stuff, I may ask you if you are salsa worthy. I took a Friday off of work to do this, and I needed the whole day. I made a double recipe, and I ended up with just seven pints. Leave it to hubby to burst my salsa bubble by putting an economic spin on it: “Seven jars at five bucks a pop. Congratulations you just made $35.00 today.” 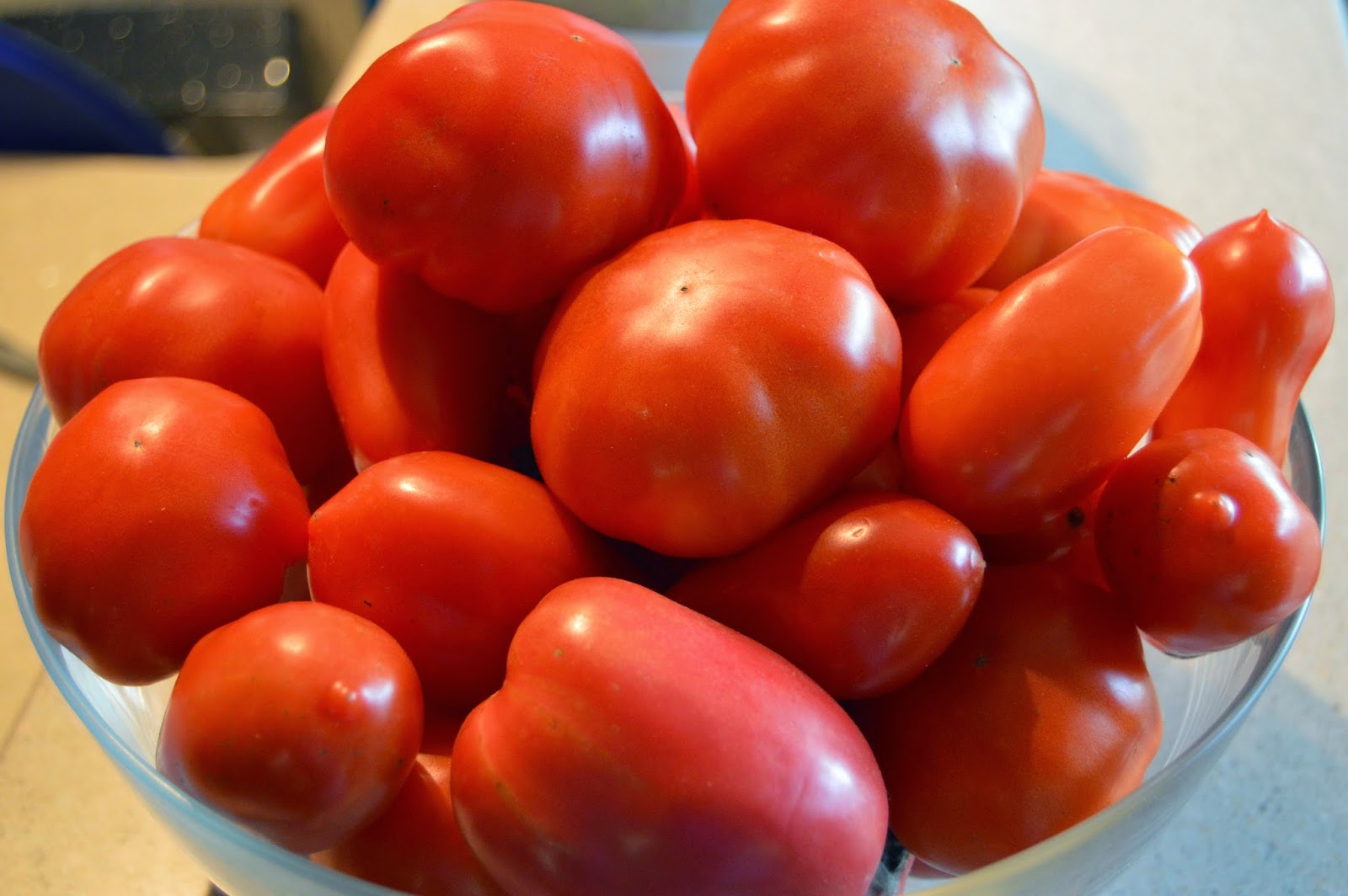 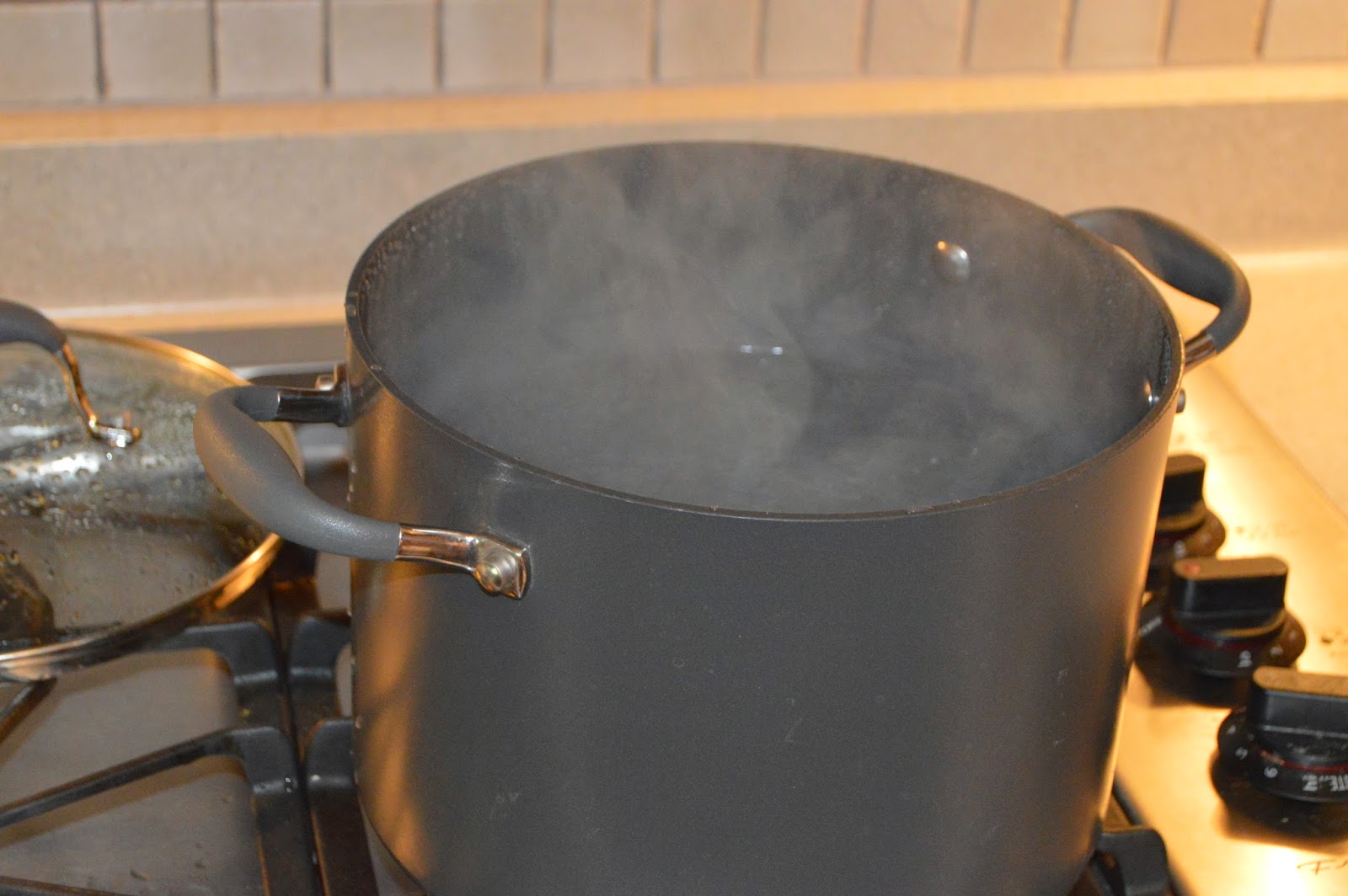 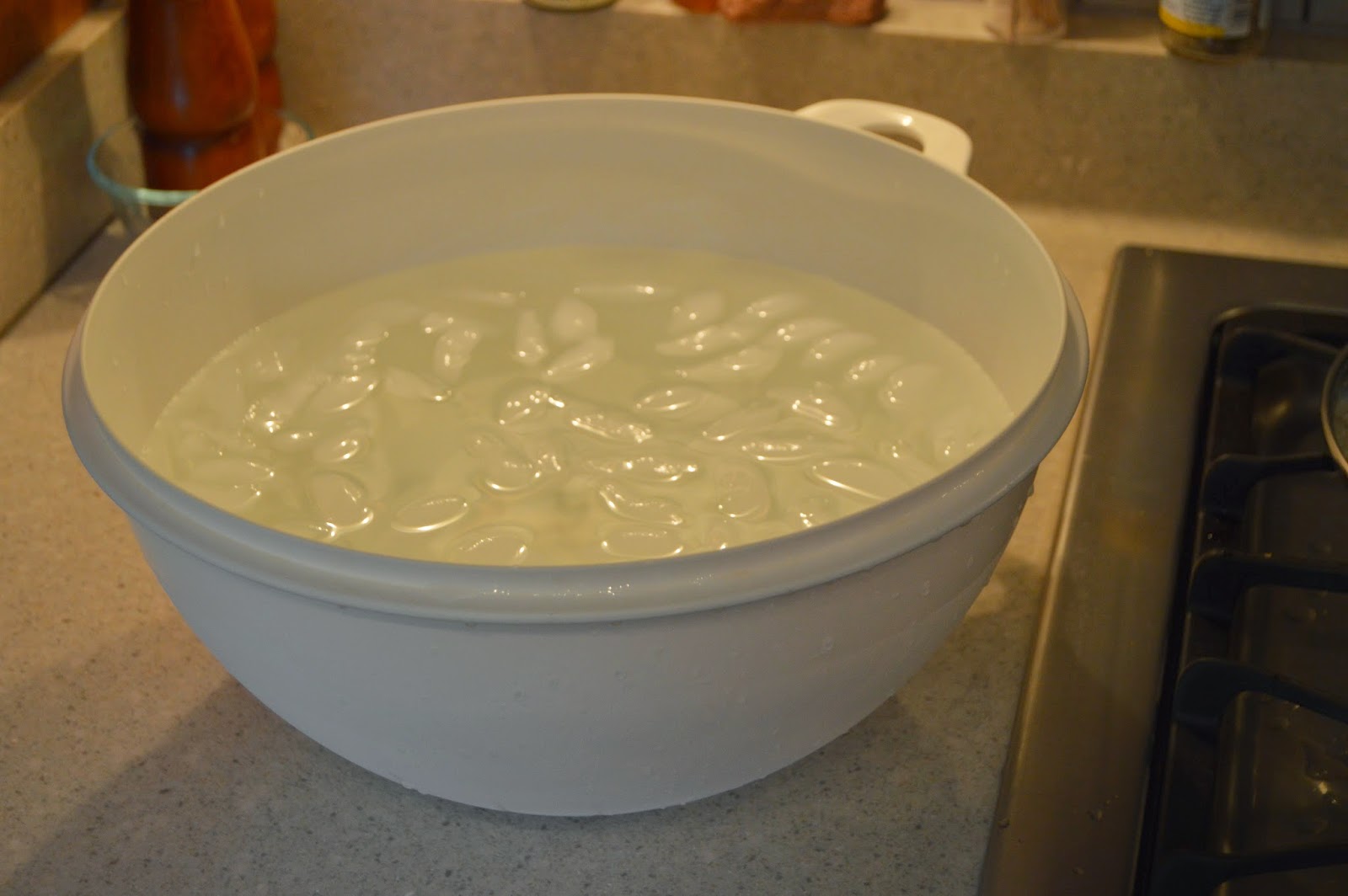 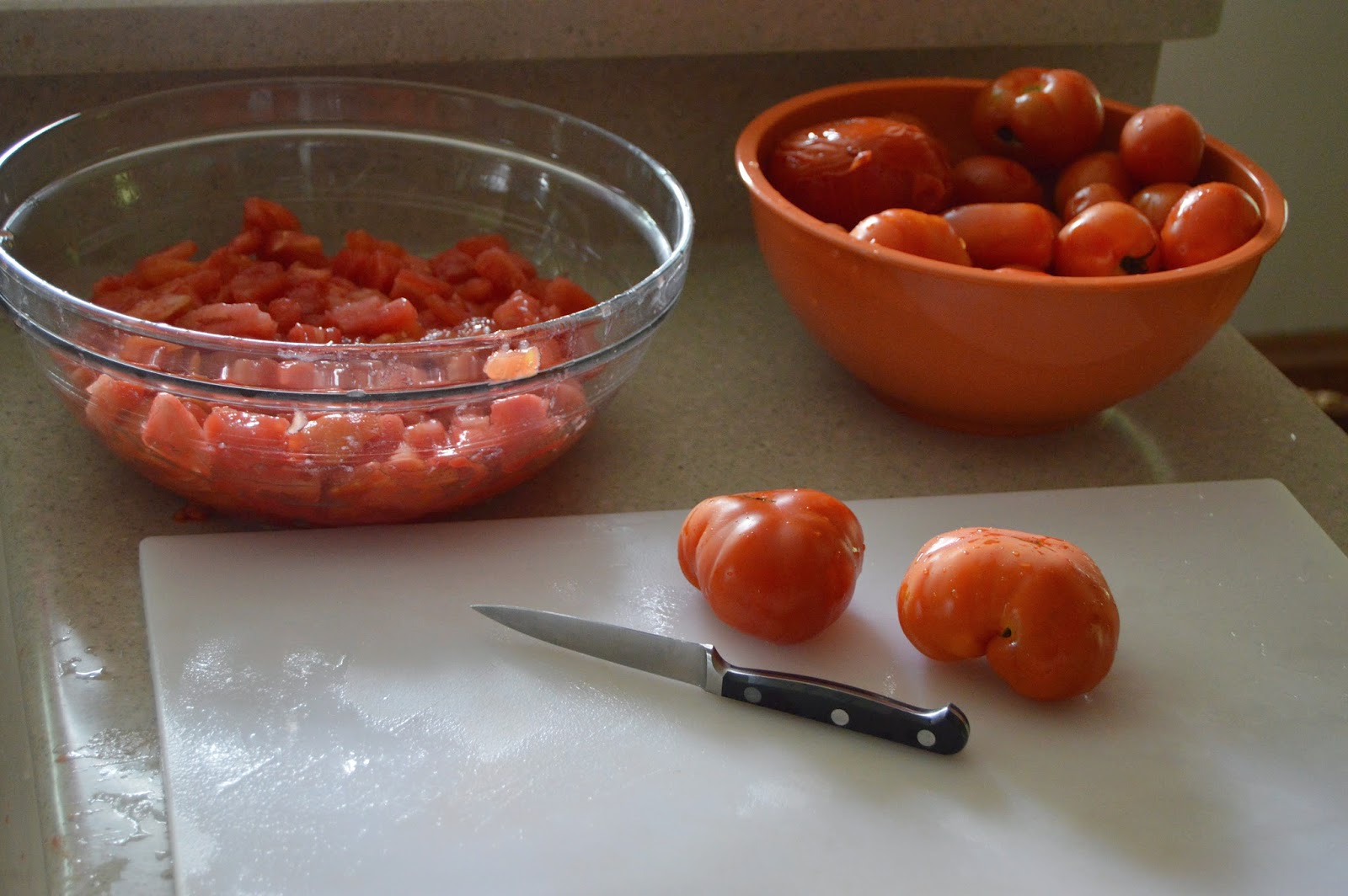 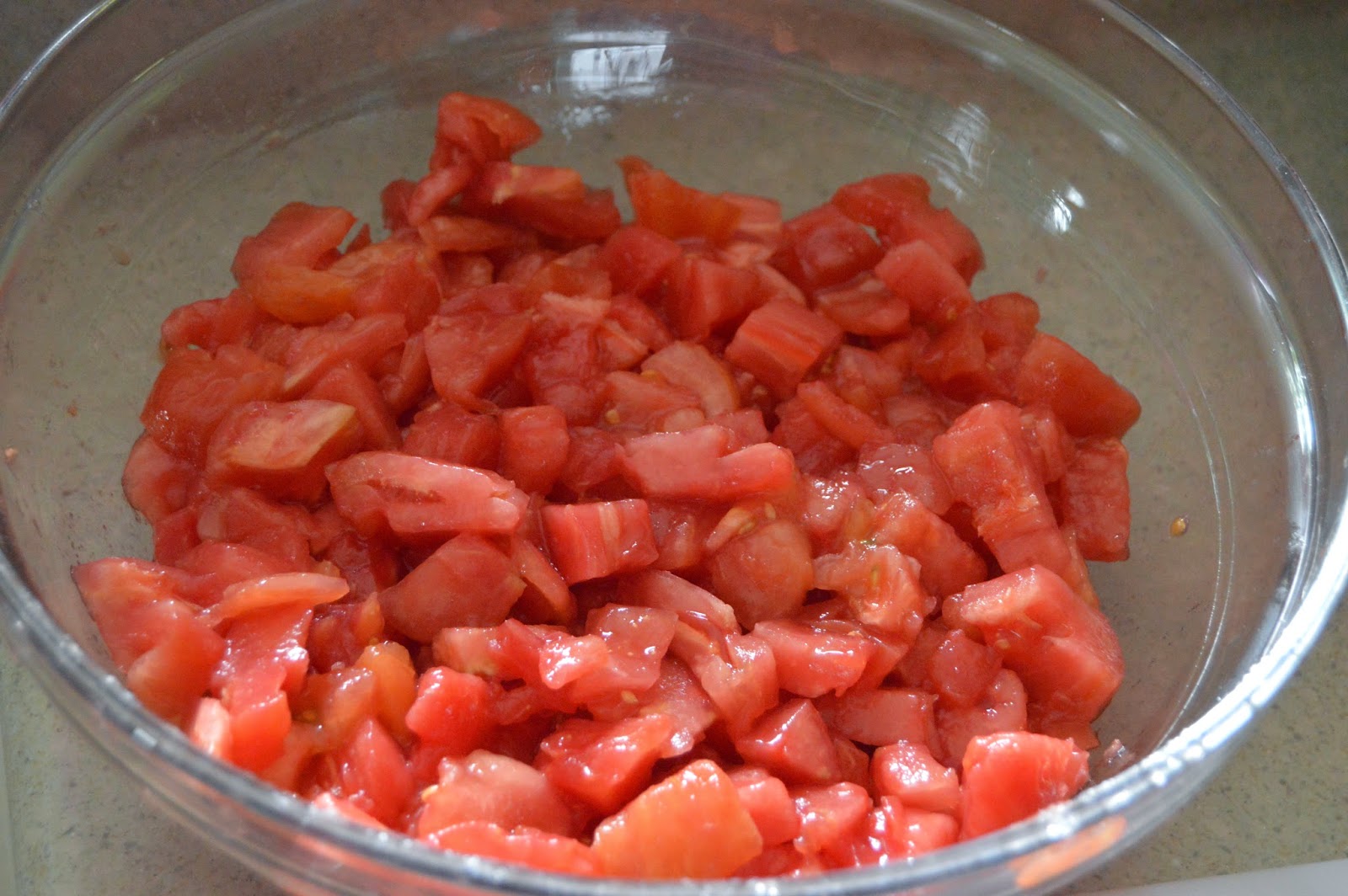 Peel the tomatoes, remove the core and seeds. Dice coarsely. 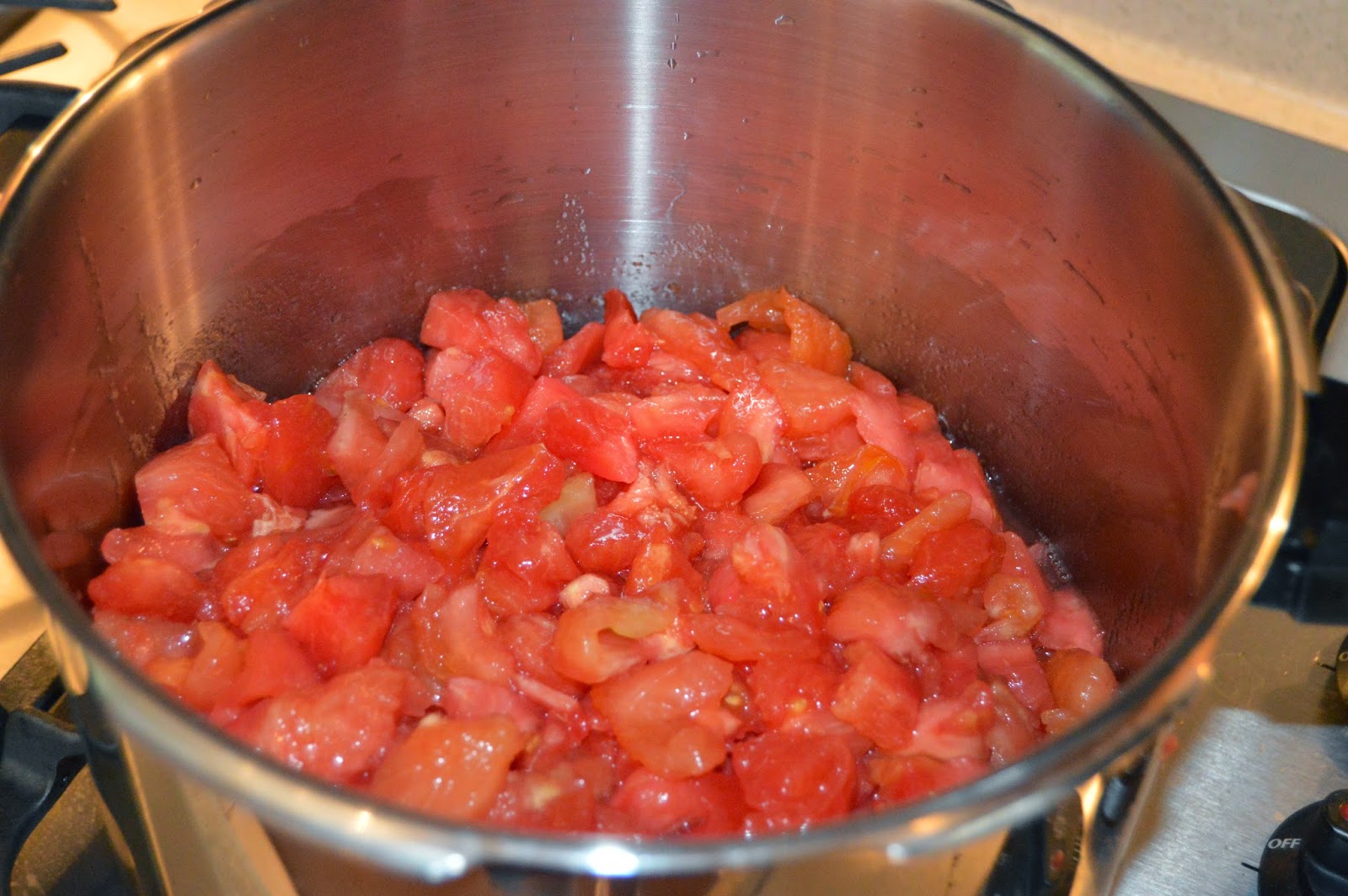 I doubled the recipe, so at this point, I pressure cooked these tomatoes while I worked on the next batch.

Here I am roasting the peppers. I wanted to give the salsa smokey layers. 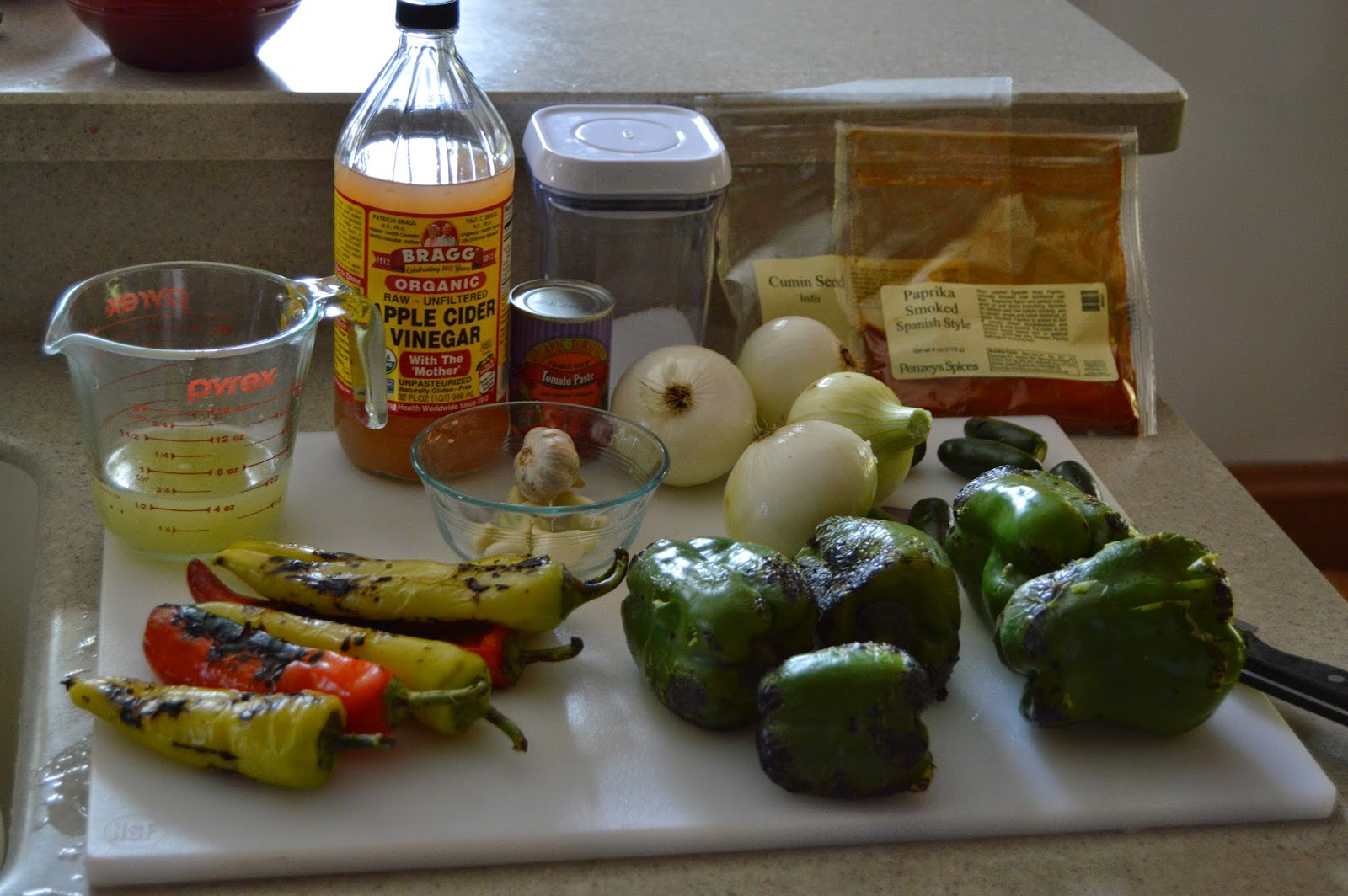 The ingredients minus the tomatoes and cilantro: lime juice, vinegar, organic tomato paste, kosher salt, cumin seeds, smoke paprika, onions, jalapenos, green peppers, garlic and banana peppers. I chopped the jalapeno and garlic in the food processor. I also used the processor to slice the peppers and onion. 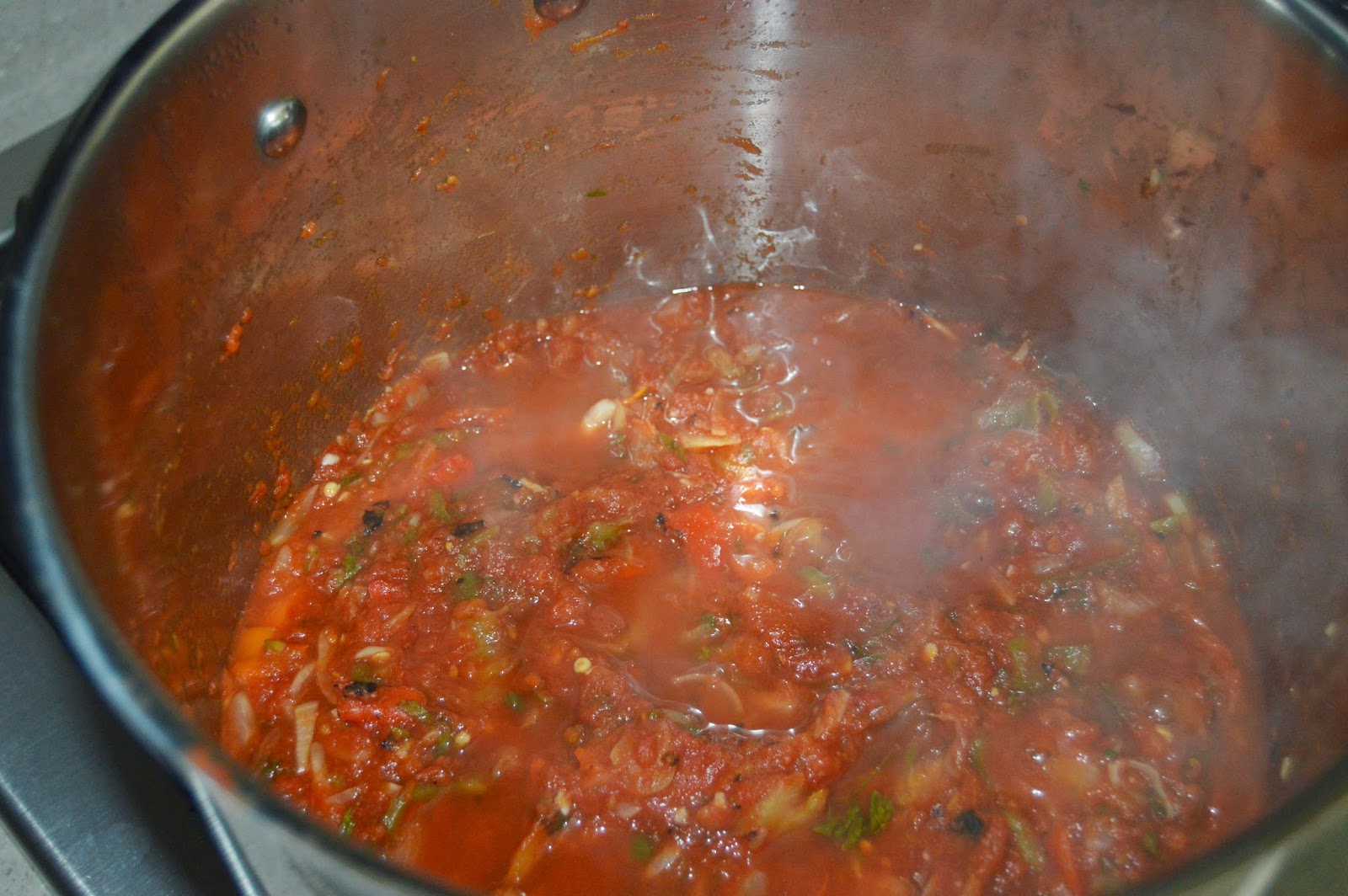 I cooked this longer than the recipe recommended. I simmered it for around 25 minutes. 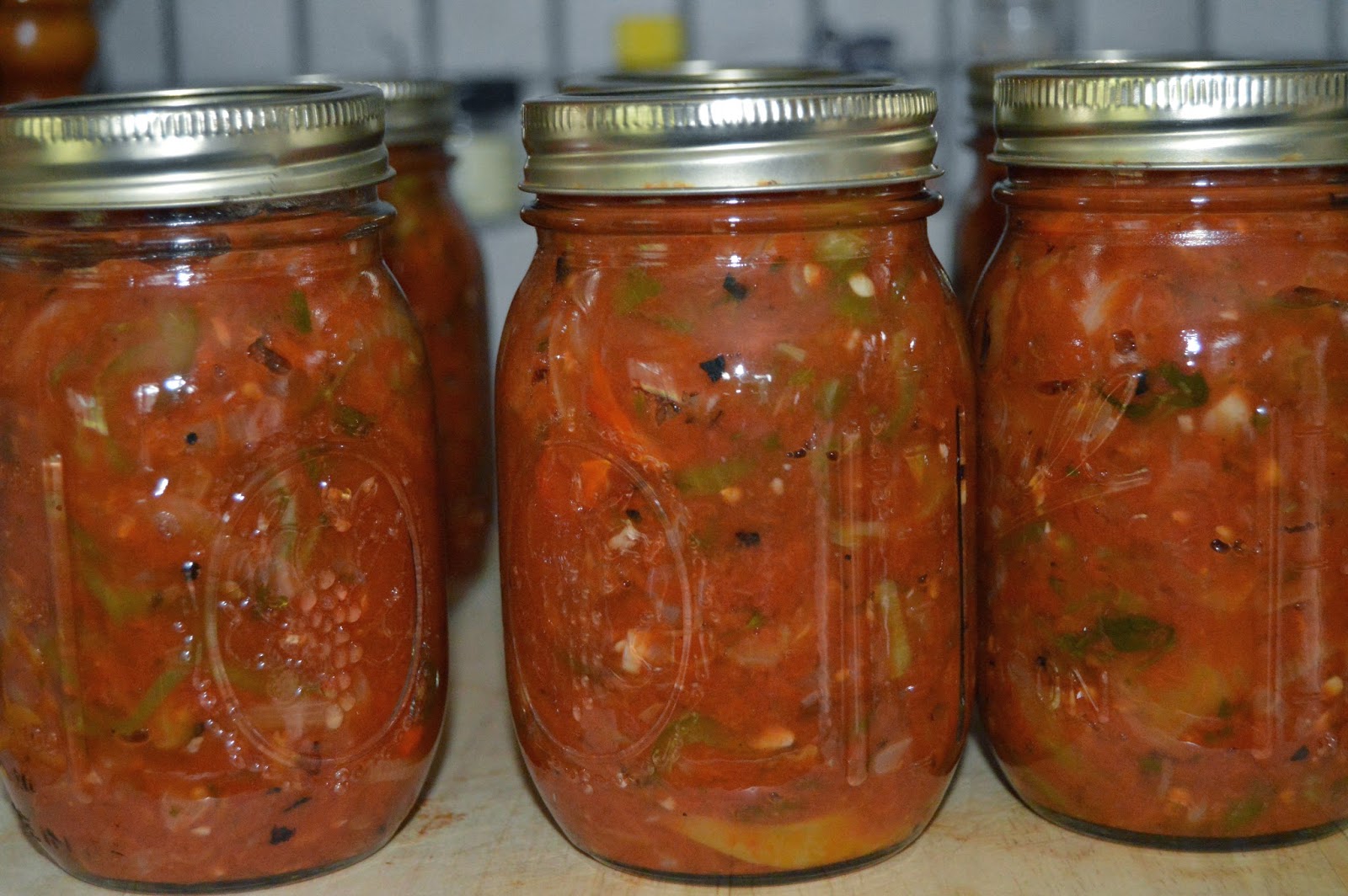 Notice no pictures of the bath? A little too frenetic and timing is everything. I tried a couple of spoonfuls of salsa, and it definitely has smokey undertones. And it’s a little spicier than I usually make. This is more like a strong medium heat.

1.Wash tomatoes, and remove stems and cores with a knife.
2. Bring at least 4 inches of water to a boil in a large kettle, and immerse tomatoes, a few at a time, into boiling water for about a minute, or until the skins start to crack and peel off the flesh
3.Immediately dip tomatoes into cold water, and drain in a colander.
4.Slip off the skins, and discard( I also seeded the tomatoes)
5.Coarsely chop the tomatoes, then place in a large colander set in sink, and allow to stand for 30 minutes. This will allow much of the tomato juice to strain out(I skipped this step and put the tomatoes into the Pressure Cooker as is).
6.Transfer the drained tomatoes to a 7-8 quart stainless-steel, enamel, or nonstick heavy pot. Bring to a boil, then reduce to a simmer.
7.Simmer, uncovered, for about 1.5 hours or until tomatoes are at the desired consistency, stirring often. You’re looking for the same consistency as a thin marinara sauce.(I used the Pressure Cooker instead and cut the time to 45 minutes. I drained the tomatoes when they came out of the Pressure Cooker).
8.Add remaining ingredients. Return mixture to boiling, then reduce heat to a simmer.
9.Simmer, uncovered, for 10 minutes. Remove from heat.
10.Ladle hot salsa into hot, sterilized pint canning jars, leaving a ½-inch headspace.
11.Wipe jar rims clean with a damp towel; place lids on jars, and secure in place by hand tightening the bands onto the jars.
12.Process filled jars in a boiling-water canner for 15 minutes (start timer when water returns to boiling).
13.Remove jars from canner, then cool them on cooling racks or on a towel on the counter.

One thought on “The Wisconsin Tomato”