I love marinara sauce.  My pasta, pizza, and eggplant parmesan usually have more sauce than anything else. When I received the news how good lycopene is for us and how it’s nutritionally better when the tomatoes are cooked, I became an even bigger marinara fan; lay it on and lay it on thick!

When we started growing tomatoes in the garden, I had the great idea of making my own pasta sauce. I painstakingly peeled, seeded and cooked-down the tomatoes. I thought it was going to be heavenly, but it was not.  Compared to the jars of pasta I was pulling off of the grocery store shelf, it was bland and tasteless. I didn’t make my own sauce for years after that episode but eventually I realized my disappointing sauce lacked the tablespoons of sugar and salt the commercial jars contained. Fast forward a “few” years, and here I am in my “abhorrence of anything salty” stage, and my DIY kitchen movement, and I wasn’t even making my own marinara. I rectified that with a recipe of marinara made with canned tomatoes in a slow cooker. It was darn good and a helluva a lot better than what I could buy in the store.  To be honest, the DIY came about from needing more control of what goes into my food.  Most everything made outside of my kitchen is too salty, too over-cooked(veggies)and just not as good as what I can make. The marinara is another example of this. I seek out the tastiest, healthiest, organic canned tomatoes along with other organic ingredients, and I have pasta sauce or pizza sauce quickly available either by whipping up a batch or pulling extras out of the freezer. With a good marinara in your fridge or freezer, you’ll have an array of options for dinner or lunch. 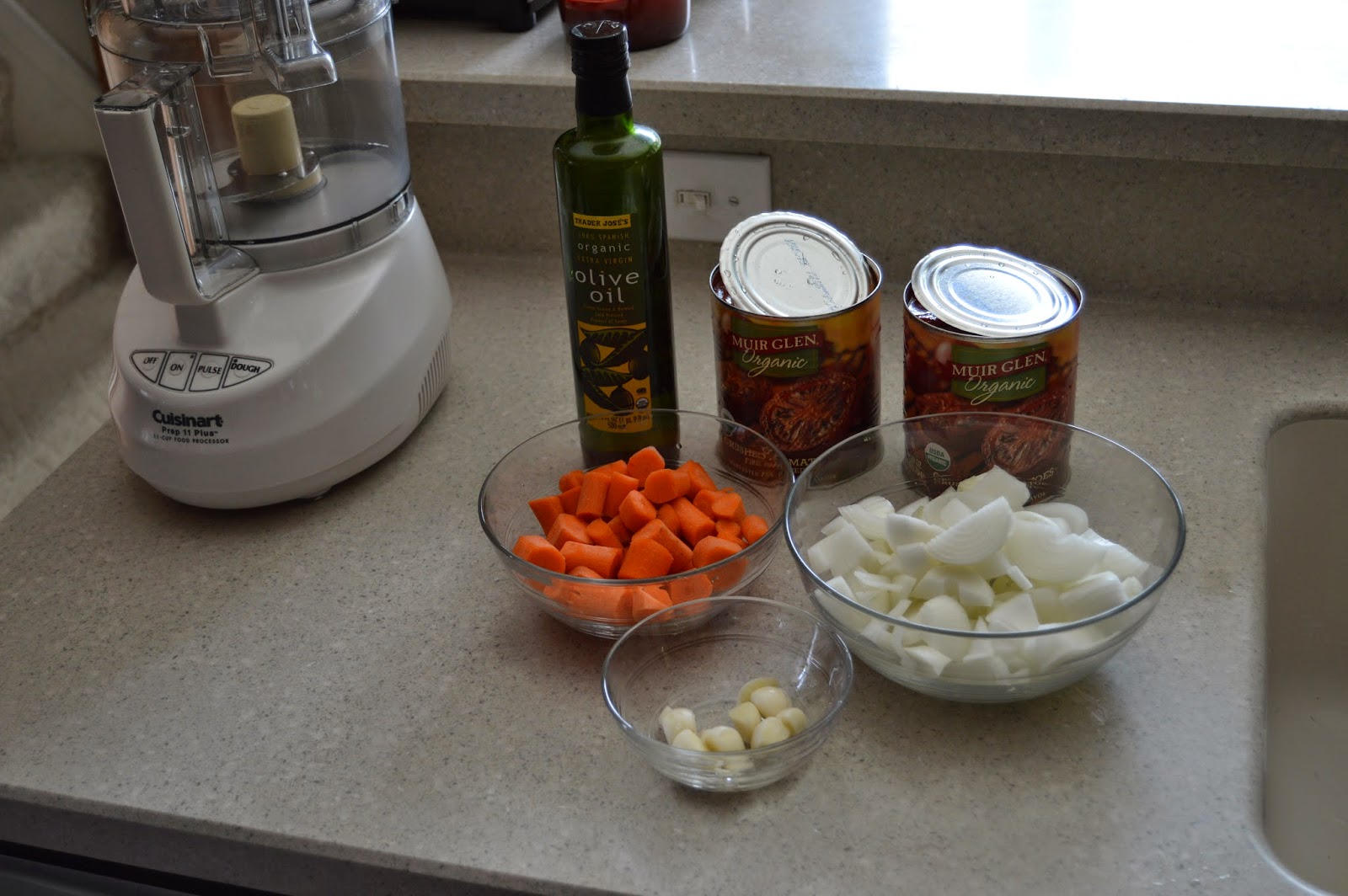 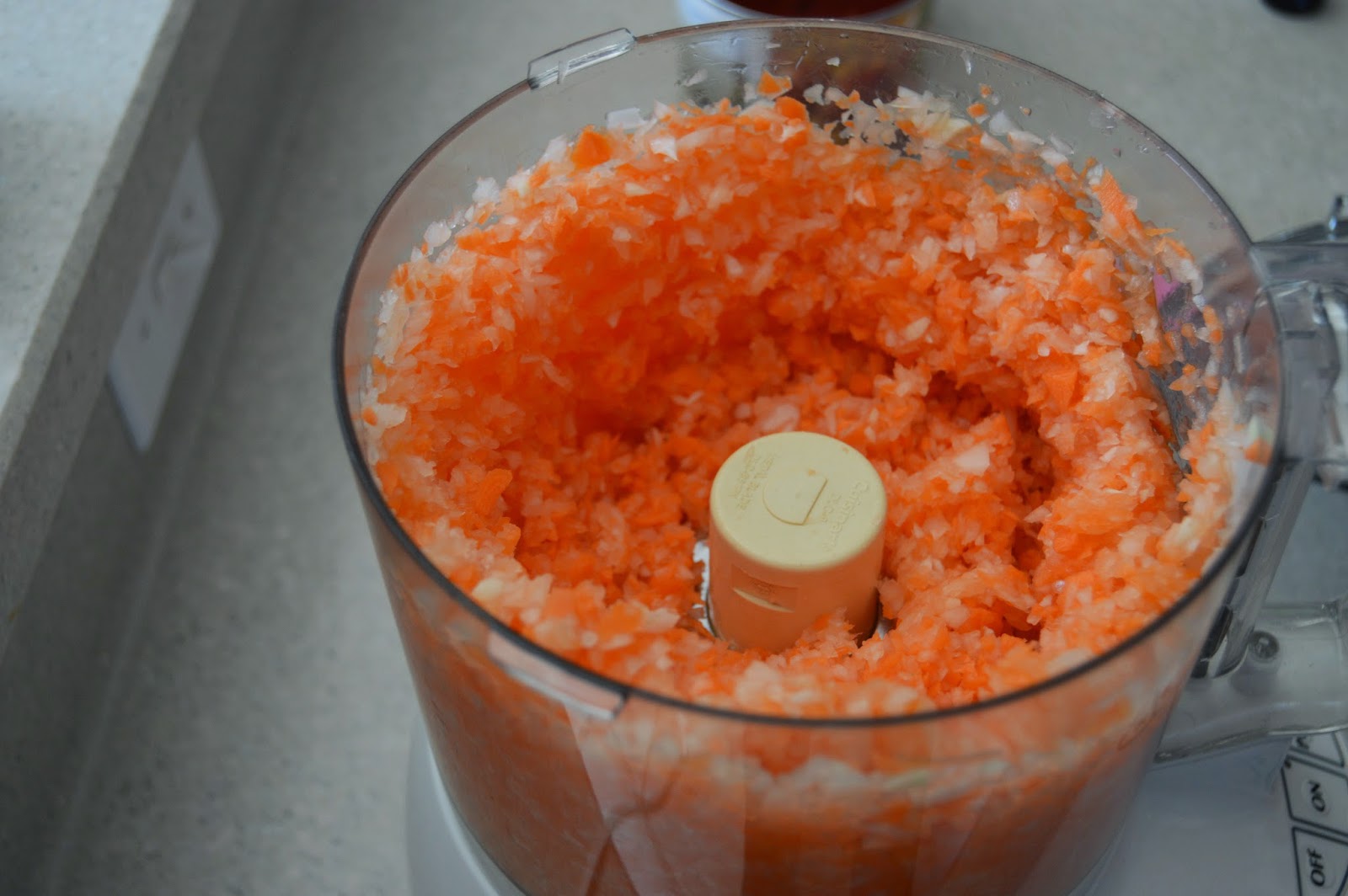 Chop large: 3 carrots and 1 large onion. Peel 6 cloves of garlic. 1 can 28 ozs of crushed tomatoes and 1.5 Tbls of olive oil. Throw the carrots, onions and garlic into the food processor and pulse until finely minced. Add oil to pressure cooker and heat on medium heat
Add the minced vegetables. Saute for four minutes. Add in the crushed tomatoes, mix and put on the pressure cooker lid.  Once it reaches pressure, cook for 45 minutes. 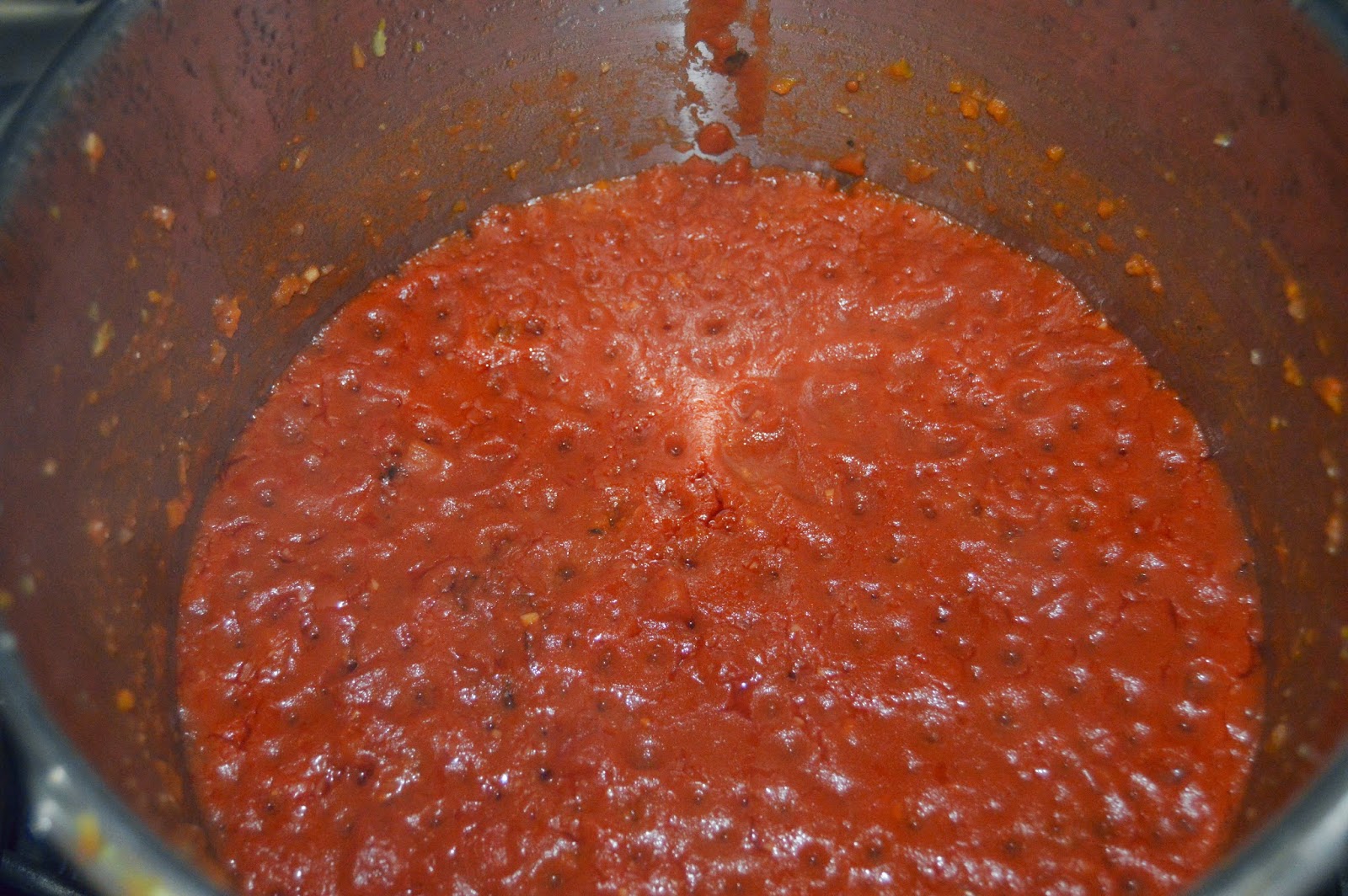 Seriously, all it took was 15-20 minutes to prep and another 45 minutes to cook. Doesn’t that look good?

I pulled this out of  the Vegetarian Times, January/February 2013 issue. This is the marinara used in the microwaved Eggplant Parmesan recipe from the Mod Squad Cooking Lab. I made a double batch so do not use the photos as a guide. 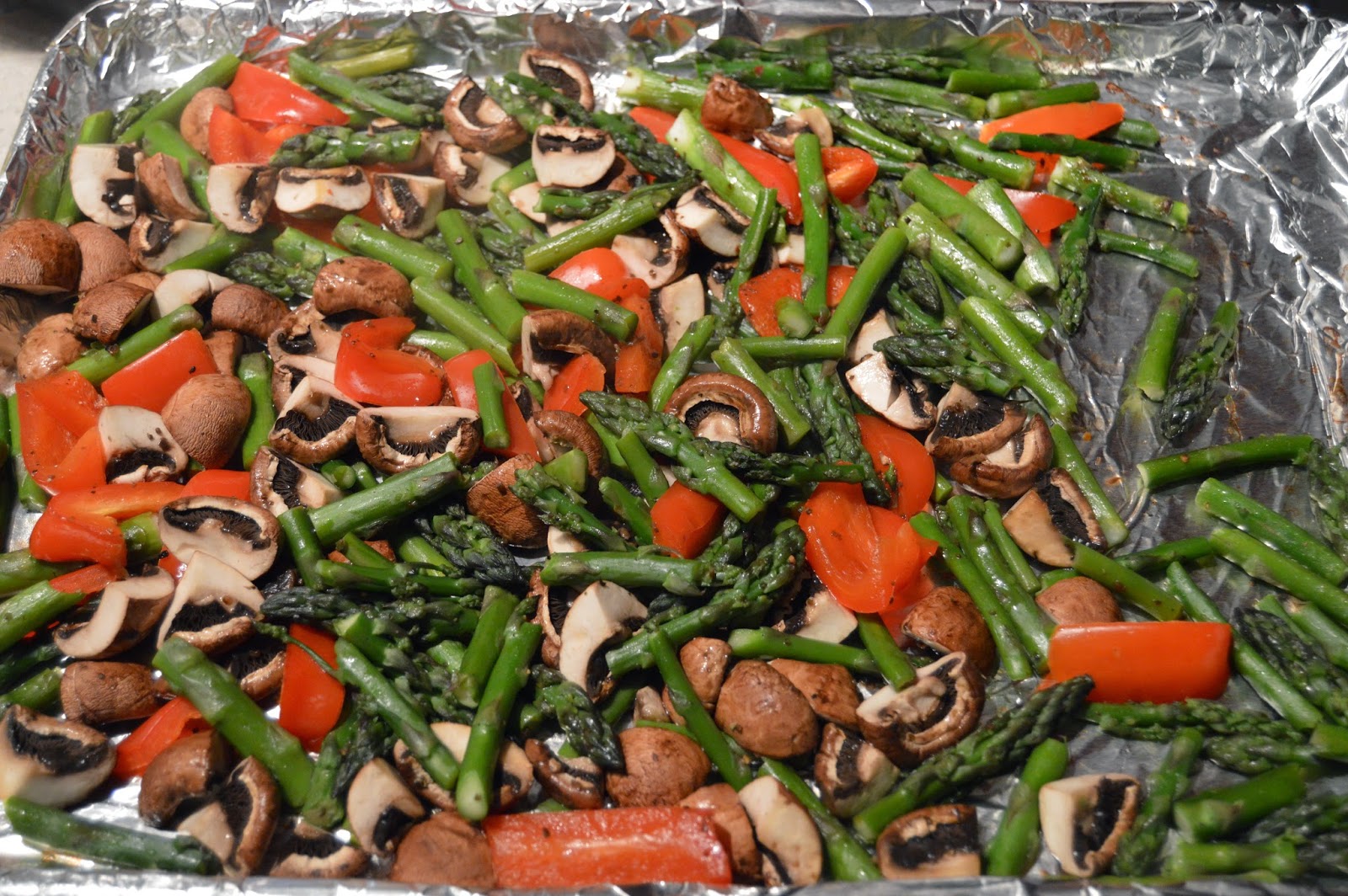 Position the oven racks top and bottom and heat the oven to 400 degrees F.

Roast veggies for 10 minutes then switch racks and shake the pans a little. roast for another 7 to 10 minutes until preferred doneness.

A grain loved by Italians and often found in many Tuscan dishes. The texture is firm, nutty and very different.

Bring water to a boil and add the Farro.  Boil for 15-20 minutes.  This is the pasta cooking method and works very well with this grain. 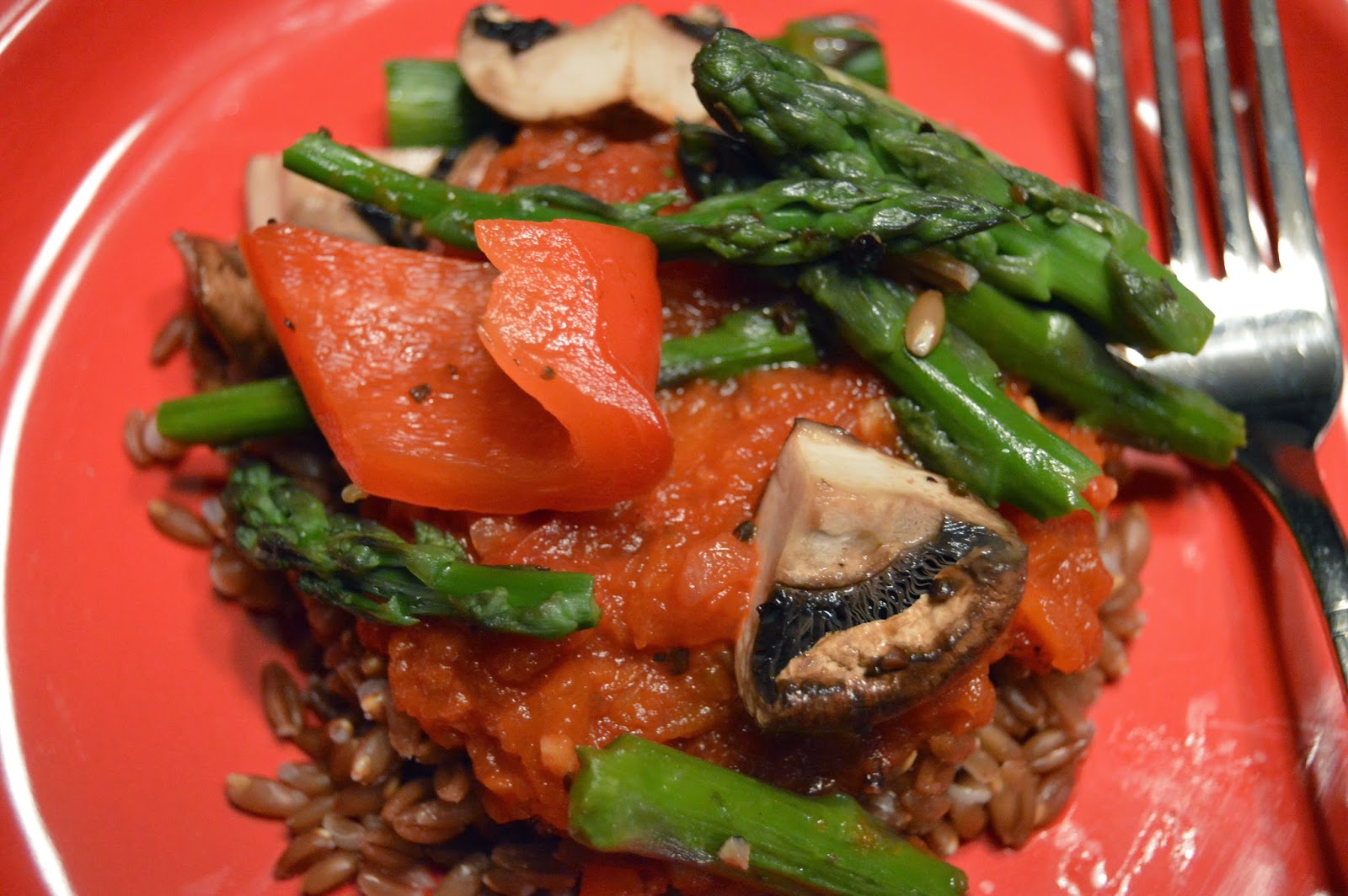 Marinara and roasted veggies on a bed of Farro.